What is modern slavery?

During the 300 years of transatlantic slave trade, about 12.5 million people were enslaved in the Americas. Today, an estimated 40.3 million people are enslaved globally. That means that there are 5.4 victims of modern slavery for every 1000 people in the world…. Evidently slavery has not merely endured – it has thrived.
-Nolan and Boersma, Addressing Modern Slavery, 2019

Modern slavery is a relationship based on exploitation. It is defined by a range of practices that include: trafficking in persons; slavery; servitude; forced marriage; forced labour; forced marriage, debt bondage; deceptive recruiting for labour or services; and the worst forms of child labour and is visible in many global supply chains. Each of these terms is defined in treaties and documents of the United Nations and the International Labour Organization.

Regular revelations about modern slavery show that it can reach into every aspect of a company’s operations and supply chains, as well as into consumers’ lives through our daily consumption. Modern slavery is found in a range of sectors including (but not limited to) domestic work, manufacturing, construction, mining, agriculture and fishing. It poses uncomfortable truths for businesses and individuals.

Modern slavery occurs in every region of the world in both developing and developed countries and if affects women disproportionately (accounting for 71% of the estimated 40 million victims).

Modern slavery is best understood as existing on a continuum of exploitation. Such an outlook recognises that people can be exposed to working conditions that gradually worsen, sometimes leading to modern slavery. 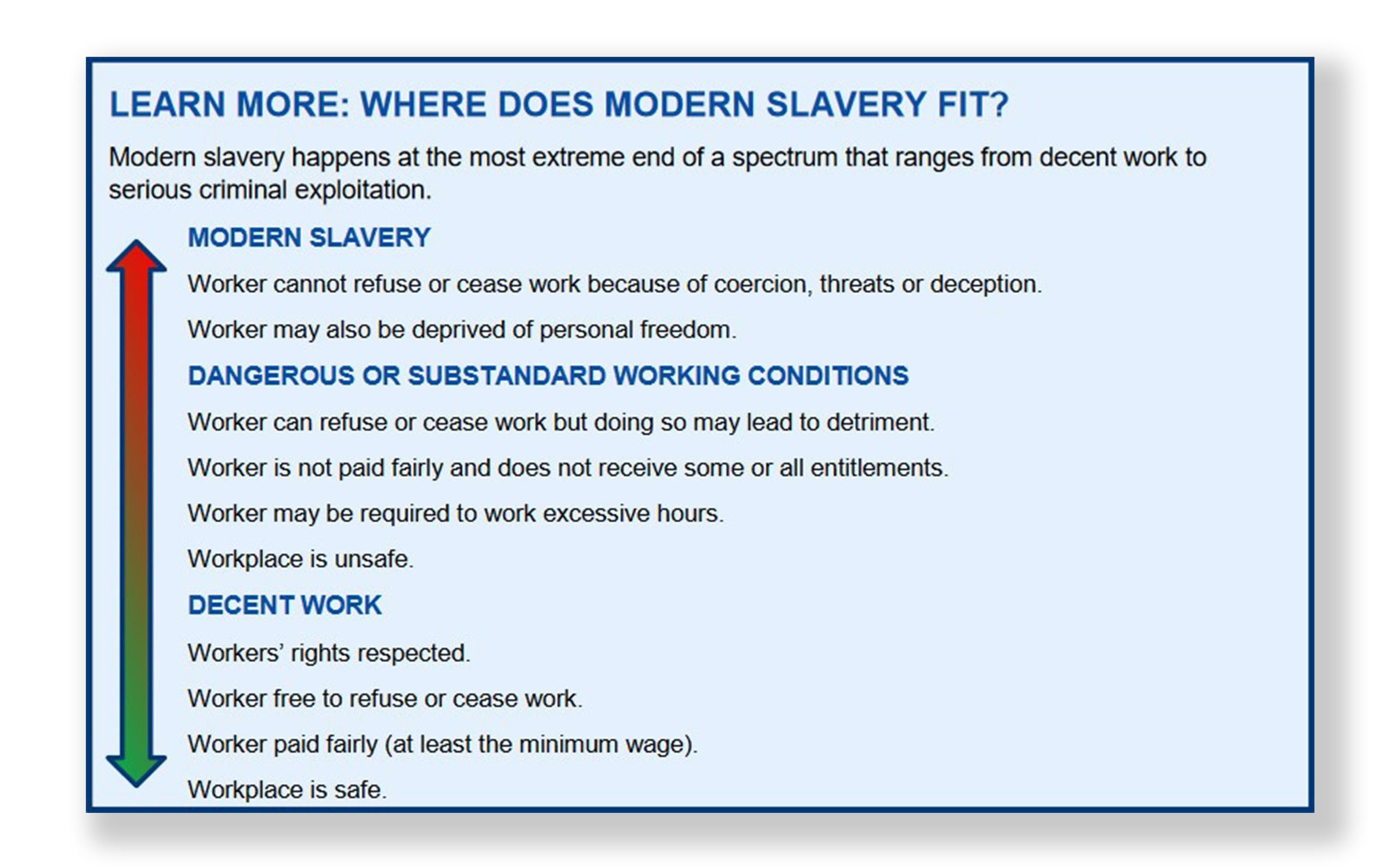 Forced labour is a form of modern slavery often considered most relevant to workplace exploitation and is a feature of many global supply chains. Forced labour refers to work that people must perform against their will under the threat of punishment. The International Labour Organisation estimates that forced labour in the private economy generates US$150 billion in illegal profits each year (ILO 2014). Of the 25 million people estimated to be working as forced laborers, 16 million of these are working in global supply chains and half of those are experiencing debt bondage (where individuals work to pay off a debt while losing control over working conditions and repayments).

At the Crossroads: 10 years of implementing the UN Guiding Principles on Business and Human Rights in Australia