A profile of the modern activist

A new generation of activists has emerged in response to climate change. How can we distinguish this wave from those that came before? 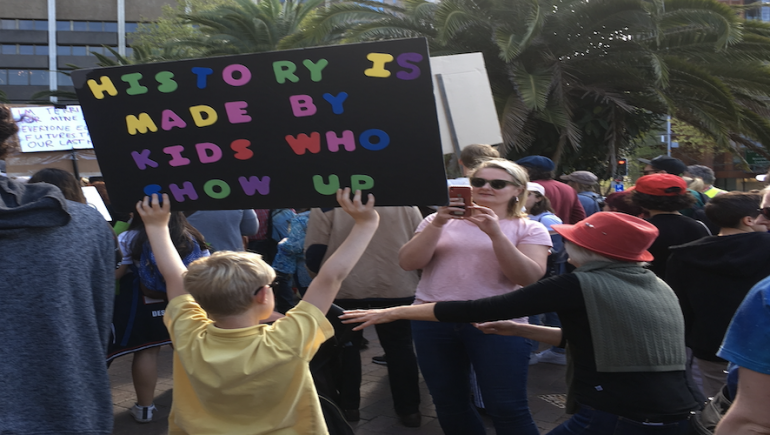 History is Made by Kids who Show Up - one of the students at the Sydney Climate Strike, September 20 2019.

A new generation of activists has emerged in response to concerns about the impact of climate change. This new wave is being referred to as the ‘Generation Greta’, after the 16-year-old eco-activist Greta Thunberg. They are known for their outspokenness, and attempts to influence adults and decision makers to seriously consider the impacts of climate change.

However, environmental activism has been present in Australian society since the 1860s, so how may we distinguish this most recent generation of activists from those that came before?

A Younger Breed of Activists

Australia has seen a significant number of school-age children choosing to engage in environmental activism, following in the footsteps of 16-year-old Thunberg. Recent climate demonstrations have been organised by school students, and prioritised young speakers. Australia’s political leaders have opposed the school-hour demonstrations, citing concerns about attendance rates and educational disadvantage.

But activists argue the impacts of climate change will mainly fall to them, and have asserted their right to be heard in the political sphere. The demonstrated commitment to participate in political discussions breaks the common perception that young people are politically disengaged.

A Diversity of Voices

Modern climate activism has embraced Thunberg as a figurehead of the movement, and embraced her Asperger syndrome is a “superpower”, rather than a limitation. Australia’s movement has similarly embraced diversity in its approach. Recent events have included speakers from the Indigenous community, primary school, and rural areas to speak against the impact that climate change is having on their communities.

When people in power use Asperger's to undermine the legitimacy of Thunberg's argument, it may speak to how they value diverse voices within the community. Australian political commentator Andrew Bolt, for example, described Thunberg as “deeply disturbed”, “freakishly influential” and “strange” - evoking a degree of ableism. This editorial faced worldwide backlash for its reductive perceptions of people with disabilities, and a response from Greta herself.

What follows is that this emerging generation of activists is open to elevating different and unique voices and perspectives to raise awareness of climate issues.

The use of technology and social media has changed the way young activists interact, stoking criticism for the absence of ‘real-world’ protest. The younger generation has co-opted social media as a safe space to express opinions, share information and engage tightly knit political communities. Examples from across the globe demonstrate that activists routinely organise events on Facebook and share essential updates on websites like Twitter. And new technologies emerge every day, which add to the young activist’s options when staying one step ahead of authorities in areas with authoritative government structures.

Sceptics may argue that online-only political engagement, referred to as ‘clicktivism,’ primarily seeks out social validation, rather than the appropriate structural change. But it is not surprising that young people may rely upon online outlets rather than using direct protest methods. Such an option allows young people to safely self-organise away from the direct gaze of the existing power structure, avoiding concerns they may appear too “extremist” to employers. School students may be taking the place of university students as activists because they have fewer constraints to expressing their opinions.

Where to from here?

At its core, environmental activism remains focused on the sustainable conservation of ecological resources, despite the inclusion of social media and a young demographic. On the other hand the most recent protests across the world suggests a fundamental difference which separates modern activism for its historical roots.

More than ever, there is a sense of urgency regarding the environmental threat, raising real questions as to the wellbeing of people across the world across successive generations.

Such a danger provides a directness for environmental advocacy that has been previously unseen in the Australian political environment.

Ultimately, although modern activists appear to engage in methods different from those of their predecessors, the messages remain the same. It remains the challenge of the existing power structures to listen and meet the challenge. Regardless of the response, young activists will continue to make their voices heard.

For more about young people and human rights, read about the Young People's Manifesto on Human Rights Action here.