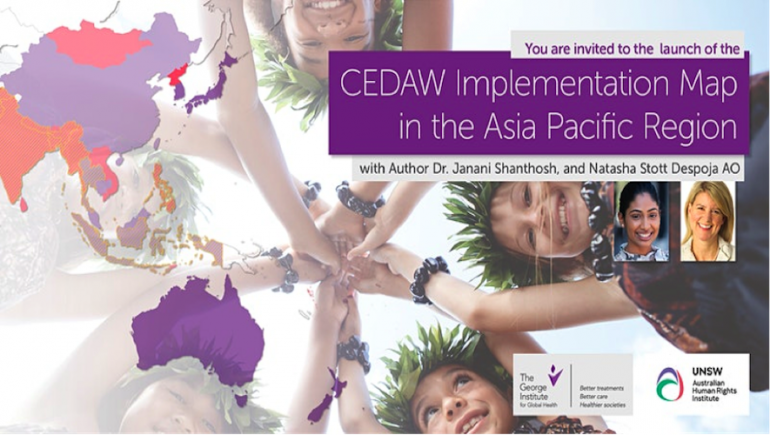 The Australian Human Rights Institute UNSW and The George Institute for Global Health have developed the Convention on the Elimination of All forms of Discrimination against Women (CEDAW) Implementation Map on women’s health.

CEDAW obliges UN Member States that have ratified the Convention to enact or modify domestic legislation and constitutions in accordance with the Convention and covers all aspects of women’s lives in which they are denied equality with men.

In practical terms, the recently released CEDAW Implementation Map is a data-driven analysis tool spearheading tangible change for women in the Asia-Pacific region. Specifically, it ‘measures the implementation of UN CEDAW Committee recommendations on health by governments in the Asia-Pacific region by collating all health-related recommendations and determining the nature, scope and extent of their implementation, as reported by participating governments.’

The primary data sources for the CEDAW Implementation Map are reports submitted or produced by Member States, the CEDAW Committee or civil society organisations as part of the periodic CEDAW review process.

The Asia-Pacific region is home to 60 percent of the world’s population and two billion women and girls and in 2019, 30 percent of countries in the region were experiencing an ongoing humanitarian crisis. However, the report showed that these countries had fully implemented 40 percent compared to 34 percent in countries not experiencing a crisis.

Urgent and effective action is needed to address poorly designed laws, policies and programs increasing women’s vulnerability during the pandemic in the Asia-Pacific region.

Dr Shanthosh said the Map was a tool that women’s rights advocates can use to hold governments to account, particularly where government action is inadequate, poorly funded or unacceptable to the affected women:

“The fact that over 60 percent of UN recommendations were not implemented tells us that rather than looking for new solutions, so much can be accomplished by countries adhering to their human rights obligations – doing what the UN Committee has asked them to do.”

Natasha Stott Despoja AO, Member, UN Committee on the Elimination of Discrimination Against Women; Chair, Our Watch said that the pandemic had made existing inequalities for women and girls, as well as discrimination of other marginalised groups, such as people with disabilities and those in extreme poverty, worse:

“It risks impeding the realisation of human rights for women and girls.

“It has also created a financially constrained environment, but also one in which researchers and policymakers can make a meaningful change and create a new opportunity for our community locally and globally.

“The CEDAW Implementation Map is an example of a human rights voice that signifies the need for change.”

The report can be found here and a recording of the panel discussion here.