A historic opportunity to raise the age of criminal responsibility 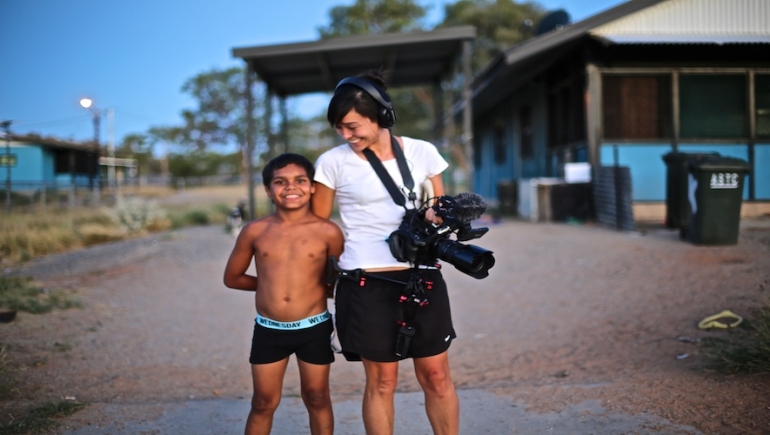 Director of In My Blood It Runs, Maya Newell, with its star, Dujuan Hoosan

In 2020, Australian Attorneys-General have a historic opportunity to promote the rights of children by raising the age at which children can be held criminally responsible. Australia’s detention of kids as young as 10 years old was raised at the UN Human Rights Council by Dujuan Hoosan, a 12-year-old Arrernte/Garrwa boy from central Australia, who is the subject of the documentary film, In My Blood It Runs.

Sharon: Australia has been heavily criticised both domestically and internationally for the current state of our laws. For decades, calls to change the minimum age of criminal responsibility have been unsuccessful. How would you describe the way the law functions now? And what are the practical implications of this?

Shahleena: Currently, across Australia, children as young as 10 can be arrested, charged with an offence, hauled before a court, locked away in prison and deprived of their liberty and ultimately their wellbeing. Ten-year-old kids belong in schools and playgrounds, not in prisons, but Australia’s archaic laws are ripping children from their families, community and culture and throwing them into concrete cells. Decent politicians would raise the age of legal responsibility.

Sharon: Dujuan’s message at the UN Council session was very powerful. Unfortunately, it seems as though the government remains reluctant to make the appropriate changes. As an advocate at the forefront of this issue, would you be able to shed some light on what has been happening behind the scenes since Dujuan spoke at the Council session?

Shahleena: There has been a growing understanding of this issue nationally and within states and territories due to the work by key ACCOs, medical, legal and child rights organisations. There has also been certain pivotal moments, including Dujuan’s address at the Human Rights Council and Australia’s review by the Committee on the Rights of the Child in September, that have added pressure on governments to raise the age, so much so that the Council of Attorneys General have convened a working group to determine whether the age of criminal responsibility should be raised in Australian jurisdictions. This is due to be determined in June following consultations and public submissions.

Sharon: When there is enough pressure from the public, the government does make changes. Recent positive examples have been legalising same sex marriage, and de-criminalising abortions in NSW. Even though reform of the minimum age of criminal responsibility is not yet in motion, surely reform initiatives have been making a difference.

What do you think are the main factors that make it so difficult for the government to make a shift towards reform? In your view, are there any positive signs that suggest reform will be in motion soon?

Shahleena: Children caught up in the criminal legal process are often demonised and misrepresented in the media and by politicians. The politicisation and distorted media reporting of youth offending, including misrepresentation about the nature and extent of youth crime and the character of the young people involved, have heightened community concerns for personal safety, and have contributed to ‘tough on crime’ and harmful law and order policies.

In relation to many, if not most of the children caught up in the criminal legal process, they are not seen as children deserving of protection or care. We need to change this unjust perception in order to build political support for humane and child-appropriate treatment that helps rather than harms our kids.

The Council of Attorneys-General is currently seeking submissions to inform their response to raising the age of legal responsibility. Australian Attorneys-General have a historic opportunity this year to promote the rights of children with a commitment to raise the age at which children can be locked up.

Sharon: What do you think is the ideal outcome for this issue as a whole? And in the meantime, what can we do as individuals to push for reform? Where can people seek more information and what initiatives can they support?

Shahleena: All states and territories must raise the age at which children can be locked up from 10 to 14 years. The current minimum age of legal responsibility in Australia is out of step with international human rights standards and medical science on child development. Children belong in their communities with their families and guardians, not in detention. Imprisonment should be a last resort when it comes to children, not a first step.

There is a national - and in some states and territories, regional - campaigns calling on governments to raise the age. You can get on board by signing the petition, telling your friends, neighbours and family to get on board and by contacting your local MP.

Sharon Choi is a final year student in the Bachelor of Science Laws at UNSW Sydney and was Student Associate Editor for the Australian Journal of Human Rights, Summer Term 2020.