Australia's progress in addressing violence against women since the Beijing Declaration

Twenty-five years after the Beijing Declaration, Australia has work to do on reducing violence against women. 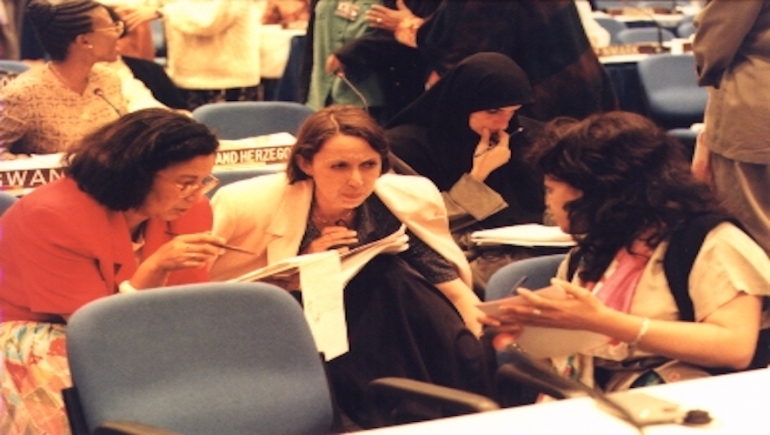 A scene at the late-night meeting of the Main Committee of the Fourth World Conference on Women held on 13 September 1995 in Beijing, China. Credit: 131329/M. Grant

Since its introduction in 1995, the implementation of the Beijing Declaration and Platform for Action by national governments has been reviewed and appraised every five years. With this year marking 25 years, we reflect on Australia’s recent attempts at addressing violence against women.

What is the Beijing Declaration and why is it significant?

In 1995, the United Nations held the Fourth World Conference on Women in Beijing to discuss issues affecting women and to review the Nairobi Forward-Looking Strategies for the Advancement of Women drafted a decade earlier.

The 189 countries attending the Conference unanimously adopted the Beijing Declaration, which set out principles and goals for improving equality and development for women. This included implementing the Platform for Action designed to further women’s empowerment and to remove barriers preventing women's active and equal participation “in all spheres of public and private life”.

The Beijing Declaration and Platform for Action was a monumental step in pushing gender inequality to the front of the international development agenda. Not only did the Declaration acknowledge the wide range of issues faced by women around the world, it also developed a progressive set of policy goals that continues to be regarded as one of the most significant and comprehensive global policy blueprints on the empowerment of women.

Unfortunately, the Beijing Declaration is still far from achieving its objectives.

In the 20 year review, the UN Secretary General’s report made a grim reflection that the “world has not ‚Ä¶ improved much for women and girls”. Overall, implementation has been “slow and uneven ‚Ä¶ with serious stagnation and even regression in several areas”. Of great concern is the finding of an “unacceptably high” rate of violence against women, with 35% of women globally having experienced physical or sexual violence‚Äîthe most common form being intimate partner violence. The report identified that a “major obstacle for ending violence against women is the persistence of discriminatory attitudes and social norms that normalise and permit violence”.

At the core of Australia’s national policy response is the National Plan to Reduce Violence against Women and their Children 2010-2022 (the ‘National Plan’).

The National Plan is a 12-year framework aimed at preventing violence by increasing gender equality and changing community understanding of and attitudes towards violence through education campaigns. It also involves efforts at improving support for domestic violence victims and encouraging behaviour change in perpetrators. Amongst other things, the fourth (and final) part of the National Plan for 2019-2022 seeks to further many of these goals.

The National Plan appears to be effective in addressing the UN’s concern of attitudes normalising violence against women. The National Community Attitudes towards Violence against Women survey shows improved community outlook and knowledge on violence against women. Most Australians have a good understanding of violence, including that non-physical behaviour such as verbal abuse or controlling a partner’s money, is a form of violence. However, the survey showed there is still room for improvement, since some Australians still believe domestic and sexual violence are excusable in certain circumstances.

Despite encouraging progress in changing societal attitudes towards violence against women, the Australian Institute of Health and Welfare’s 2019 report highlighted some concerning statistics:

These statistics show that Australia is still a long way from significantly reducing violence against women.

The 20 year UN review of the Beijing Platform for Action emphasised the need for countries to allocate sufficient resources in order to realise policy outcomes.

In Australia, the National Plan places an emphasis on providing support systems and legal access for victims of violence, but these policy goals are not being met due to significant funding issues. The Law Council of Australia’s Justice Project, for example, identified the severe and chronic underfunding of court systems and legal services such as Legal Aid and Community Legal Centres as a major barrier preventing women experiencing family violence from receiving legal assistance.

With the National Plan entering its final stage, it is time to question whether its proposals have been effective, and how to move forward. Clearly, Australia has more work to do, both in terms of reducing violence and in providing support for victims.

Katharine Tang is in her final year of a Bachelor of Laws/Arts degree at UNSW Sydney and was the Student Associate Editor for the Australian Journal of Human Rights in Term 2 2020.

To mark the occasion of Beijing +25, the Institute for International Law and the Humanities, Melbourne Law School together with the Australian Human Rights Institute, UNSW Sydney, are co-hosting a conference on 2-3 December 2020, to consider the advances, and retreats, in the situation of women internationally over the past 25 years.

To view the program and register, visit: unsw.to/beijing25